The trailers of both KGF 2 and Beast films have come on YouTube. Beast will release on 13th April, and KGF 2 will release on the very next day i.e. 14th April. There is tremendous buzz about both films. Their release is also being seen as the biggest clash of the year. The makers of both the films are looking very confident about their respective products. It is certain that both these films are going to be seen a lot. But what are those five things about these films, due to which the public would like to see them, we will tell you. 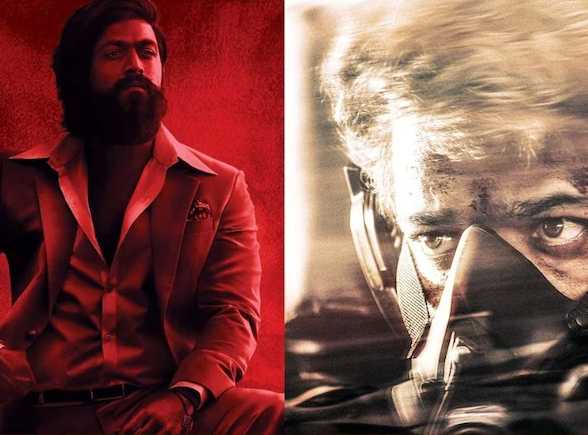 1) The most important thing about KGF 2 is that it is a sequel. That is, part 2 is about to come, usually, there is not much wait for the sequels. But after ‘Bahubali’, KGF 2 is the second film about which so much excitement is being seen. Because a story has started, which will end in the second part. KGF, which came in 2018, proved to be successful at the ticket window solely due to its content. The success of this film was that even in Hindi-speaking areas, this film had dusted Shahrukh Khan’s ‘Zero’. Which is a big deal for any regional film.

2) This film is the story of a man who stands alone in front of the entire army. Fantastic action sequences, quality VFX work, and Yash’s larger-than-life screen presence played a big role in the success of the film. But apart from these external things, the emotional core of the film is also very strong. This story begins with a mother-son conversation, which ends tragically. If the story of this film is told in a nutshell, then it is the story of a son, who is engaged in fulfilling the promise given to his mother. That promise is to become rich. Because his mother had died due to a lack of money.

3) People are going crazy waiting for KGF 2. The teaser of the film has been viewed more than 250 million times so far. The trailer is also getting a strong response. But what is the reason for this craze? The biggest reason is that Yash and Sanjay Dutt have to clash in this film. Seeing Sanjay Dutt’s look and so on, it becomes clear that he is not an aira-gaira villain. He is going to give tough competition to Rocky. His face-off scenes are the biggest USP of this film. It is a different matter that the look of Sanjay Dutt chosen for KGF 2 is not copied from the popular series ‘Vikings’.

4) The story of KGF 2 takes place in the present time. A character in the film is narrating that story. That is, the story of Rocky and Kolar Gold Field we are seeing on the screen has reduced in the past. All his characters are over. In such a situation, it is being speculated that Rocky’s character will be killed in KGF 2. Now the public is curious to know whether this character played by Yash will really be killed? If yes, how? And if Rocky didn’t die, how would this story end?

5) KGF 2 is to be released on 14 April. The advance booking of the film has started in many parts of the world. But leave India, 5 thousand tickets for the film were booked as soon as advance booking started in UK. Which is the first time with any Indian film.

1) The public is excited about ‘Beast’ only because it is Thalapathy Vijay’s film. Thalapit Vijay is in that phase of his career where everything he touches turns to gold. The testimony of this is given by the box office numbers of his last few films. All the superstars are busy trying to go pan-India. But Vijay is not doing any such thing at the moment. Because only his regional films do business of 300-400 crores from all over the world. So the biggest pull factor of ‘Beast’ is Vijay himself.

2) Ever since the trailer of this film has come out, two things are being discussed. The first thing is the dialogues of the film. I’m not a politician, I’m a soldier – this is a very simple line. Despite this, you will not hear any Hindi-speaking superstar speaking like this in his films. Vijay had made a comment related to GST in his film ‘Mersal’. There was so much controversy about it that the scene had to be cut out of the film. In those scenes, Vijay’s character says-

Some leaders of a particular party did not like this thing. Then this thing has come and gone. But Vijay had come under the target of the ruling party. He was shooting for his next film ‘Master’. The Income Tax Department picked him up from the middle of the shooting and took him for questioning. Vijay and his family members were interrogated for 20 hours. Raids were also conducted at his residence. After that, this matter suddenly got buried.

3) Back to the ‘Beast’. Seeing the trailer of the film, at first glance, this film seems to be inspired by ‘Money Heist’. The reason behind this is that some masked people are seen in the film, who are holding people hostage in a mall. Although there are many such Indian films, which are made in the backdrop of the hostess. But the story of ‘Beast’ is very similar to the 2009 Hollywood film ‘Paul Blart: Mall Cop’. The story of that film was about a man named Paul Blart, who works as a security guard in a mall. One day some people wearing Santa Claus masks enter the mall. They take people hostage. In such a situation, Paul Blart, with his understanding, frees people from the clutches of those kidnappers.

4) Not only this, there is also an aerial fighting scene in the film, in which Paul stops the main accused of this incident from escaping. In ‘Beast’ too, people hostages have been made inside a mall. They are all wearing Santa Claus masks. The character of Veera Raghavan, played by Vijay, frees all those people with his cleverness and bravery. You also get to see an aerial fighting scene in the last moments of the ‘Beast’ trailer. Due to these similarities, we are able to say that Thalapathy Vijay’s film ‘Beast’ is inspired by Kevin James starrer ‘Paul Blart: Mall Cop’.

In view of all these things, we feel that the only reason for seeing ‘Beast’ is Thalapathy Vijay himself. While there are many such things in KGF 2, for which the audience would like to see that film. This is our belief.